In every RightLine Report you’ll find the Quick List, just after the Editor’s Notes. This helpful guide contains information about the trade set-ups featured in the “Stocks Covered in This Issue” section of each Report.

The Quick List is designed to give traders fast and easy access to the most important details of each play.

Here are the first few entries from a typical Quick List:

Let’s go from left to right and take a look at what each individual column means.

1) The first column lists the Stock Symbol for the stock being covered. You’ll find the ticker in this column, but not the actual company name. So “ADSK” in the second row is referring to Autodesk – a software company.

2) The second column contains the closing price for the stock on the given date. Looking at the list above, we see that IBM closed at 94.51 on February 4th.

3) The third column shows the amount gained or lost for that session. This is given in dollars and cents, not as a percentage.

4) The fourth column features the Long (Buy) entry price for that particular stock. This is the exact price that triggers the trade, signaling you to Buy immediately. This doesn’t mean you have to buy at that exact price. You simply place a market order and buy as close to that price as possible.

Sometimes column four will be blank, which leads us to column five.

5) If column four is blank – no Long (Buy) entry – you will find a Short (Sell-Short) entry in column five. For more information on how to “Short” a stock, be sure to read “How to Win When Stocks Go Down.”

Often a stock will have both a Long and a Short entry. You’ll see this with Squeeze Plays, where a stock is in a very tight trading range preceding a significant upward or downward move. In this case you will enter at whichever entry is triggered first, and ignore the other entry. For more on Squeeze plays go to “Trading Squeeze Plays for Profit.”

If you look at the Quick List again you’ll see that the JNPR row has no long entry and one short entry at 22.69. This is the trigger price for the play, or the point at which you’d place an order to sell short. For IBM, a buy entry was recommended at 94.77.

By the way, each entry is valid for two weeks from the date it’s recommended. If the entry level price hasn’t been reached within two weeks, the trade is considered un-triggered.

6) Of course, no trade should even be taken without having an exit plan in place. That’s where the “Trailing Stops” column comes into play. Lets take a look at the first half of the column, “Initial.” This indicates the size of the trailing stop that should be used when the position is first entered.

Example: The following Quick List entry appeared in the January 25, 2005 issue of the RightLine Report:

Looking at the list, you can see that a long position in AAPL was recommended at 73.01, with an initial stop of 3.75. The entry point was reached a few days later. As soon as the buy order was filled, you’d place a stop-loss order – trailing stop – with your broker to sell at 69.26.

The trailing stop is then ratcheted up if the stock moves in the expected direction and posts a higher close. So when AAPL finished at 76.90 the next day, a new sell-stop was placed at 73.15 – 3.75 under the closing price.

The great thing about trailing stops is that they both limit downside risk and protect gains if the stock moves as expected. Protecting gains is made more effective with stops that are tightened once a certain profit is achieved. In the case of AAPL, you can see that the “tighten” amount is 2.15.

7) Another important piece of stop-related information is the “Gain Amount” located in column 7 of the Quick List. This information is also in the actual write-up, which states how much the stock must move favorably beyond your entry level before the trailing stop is tightened. The write-up for AAPL contained the following line: “Use an initial stop of 3.75 and tighten to 2.15 on a 5-dollar gain.”

This means that when AAPL closed at or above 78.01 – 5.00 above the entry point – the stop was tightened to 2.15. So when the stock closed at 79.91 on February 2nd, a new sell-stop was placed at 77.76. That level was reached on February 3rd when shares pulled back, triggering the trailing stop, and closing the trade for a gain of 4.75. 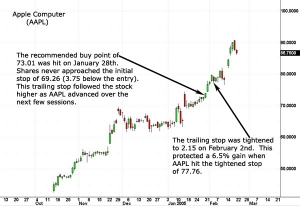 The procedure works exactly the same with short positions, except trailing stops are moved lower as the stock descends. On January 4th we recommended a short entry in Genesis Microchip (GNSS):

The chart below shows how trailing stops were used to protect a nice gain in GNSS, which contained the following stop info: “Use 85-cent stops and tighten to 40 cents on 1-dollar gain.” 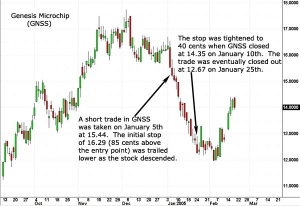 The Quick List is a handy reference guide that includes important details such as where to tighten your stops. This information, along with earnings dates or split dates and other pertinent facts, is also revealed in the actual play descriptions. Always be sure to read these write-ups before entering a position.