So are you Bullish or Bearish? When it comes to choosing trade setups, it doesn’t always have to be one way or the other. Actually, in many cases you are much better off letting the market tell you whether to go long, or to go short, or just stand aside. This is what the Squeeze Play is all about.

Not to be confused with a “short squeeze,” the Squeeze Play gets its name from one of the trade setup conditions – an extremely narrow price range which indicates a dramatic drop in volatility. Due to the cyclical nature of volatility, powerful price moves often occur soon after these low-volatility situations.

To begin, let’s look at this type of trade setup in a different light than most traders would. Instead of trying to predetermine which way price will move, we will assume that it could go either direction and plan for both. This means setting aside any expectations we may have for near-term price direction, and letting the upcoming price action determine which way we will enter the trade.

By selecting setups where there is a clearly defined narrow range between the support and resistance levels, we can enter in either direction with very little risk. The low risk comes from the fact that should the initial move fail – price doesn’t have to go very far back to confirm that it’s time to get out.

Here is an example of a Squeeze Play setup: 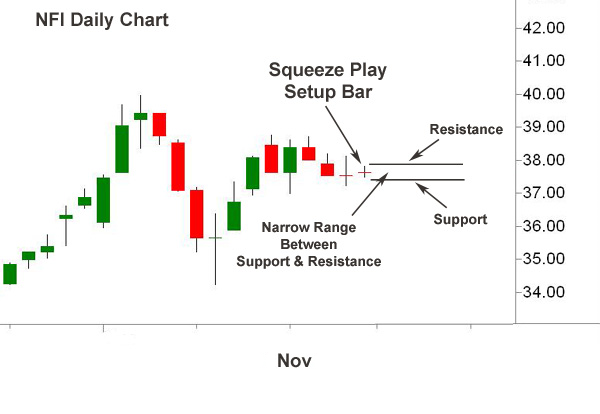 Price volatility tends to go through repeating cycles of contraction and expansion. Once price has contracted and “squeezed” into a very narrow range, it invariably begins to expand. This expansion causes price to quickly “break out” of the narrow support & resistance boundaries, and often causes a short-term trend to develop in one direction or the other.

Below is the same chart shown as above – only this one includes the short-term price action after breaking out of the range of the setup bar: 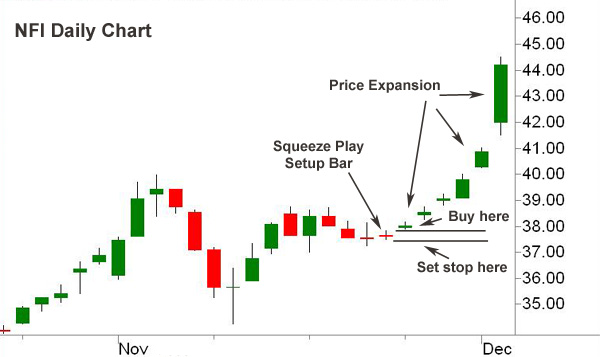 When you first look at a Squeeze Play setup you probably see it as either a long or a short. The only problem is that we don’t know which way price will go, so the solution is to let the price action tell us. The narrow range setup bar gives a perfect opportunity to place a low risk stop.

Although the example used in this article is a BUY, the concept works the same way for short sales. If price breaks down through support, then you would enter a SHORT and place an exit stop just above the top of the resistance level.

Squeeze Plays make a trader’s job easier because each pattern offers two potential trades. Though this method is very powerful, isn’t overly complicated. The key is to locate low volatility price patterns with clear support & resistance levels that offer reasonable risk and reward potential in either direction. Then you set your entry triggers and stops a calculated distance beyond the S&R levels – simple as that!