The New Low Rise is a shorting tactic designed to find low-risk entries into stocks that are in strong downtrends. Basically the opposite of RightLine’s New High Dip tactic, this profitable maneuver consists of short-selling the first rally or “rise” that normally takes place after a stock makes a new low. Here’s how it works.

After the initial panic selling that occurs when a stock breaks down to new lows, prices will almost always bounce back up in a brief rally. This rebound is due to buying by short sellers covering their profitable trades, and “bargain hunters” picking up shares in hope of catching the bottom. This first price bounce following the new low is often a good place to enter a short position. The temporary rise provides safe entry into a stock that is obviously showing extreme weakness.

As with most of our tactics, human emotions are behind the high success rate of this technique. One group of short-sellers missed the first break down and is hoping for another chance to get in before prices collapse to even lower levels. They sell-short into the rise and in doing so play a role in slowing any price advance underway. They’re convinced they’ve made a wise choice by shorting in harmony with the downtrend and expectantly wait for shares to drop even further.

Another group is already in with profits, having shorted the stock long before the recent breakdown to new lows. They are looking for a chance to add to their positions and will take advantage of the rise to short more shares at a good price.

The last group consists of traders who, just like the second group, sell shares short just before the break down. But instead of holding on as prices began to rise, they sold near the new low and pocketed some profits. Now they are waiting for the reversal to get back in short and ride the declining shares down once again.

Each of these groups of sellers help the stock find a new resistance level – often a familiar moving average – and then resume the downward movement to new lows again. 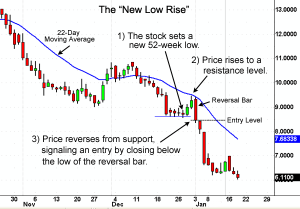 There are a few things that can keep the stock from falling lower and lower. If the overall market rallies hard enough and long enough, investors’ moods can change. This sometimes creates enough buying to keep prices from falling. Positive news, such as analyst upgrades or strong support for the sector can also keep the stock from dropping lower.

To protect your trading account, always use stops to prevent losses. Since no tactic works 100-percent of the time, use sound risk management to ensure that any losses are minimal.